One day in Huaguang - Forced Eviction and Demolition [Updated]

It took me a day to recover from observing the forced eviction and demolition of the Huaguang Community from Tuesday evening to late morning on Wednesday.  Monitoring the fifty-hour standoff between the community members, young protesters and the police was proven to be very taxing, as I realized I am no longer in my twenties.

The Huaguang Community is located on Hangzhou S. Road (杭州南路) and Jihua Road (金華路), next to the Chiang Kai-shek Memorial Hall.  The Ministry of Justice claimed ownership to the property, and the majority of the residents of Huaguang were public workers for the MOJ, civil servants and low-ranking Kuomintang (KMT) military personnel, who fled to Taiwan after the Nationalist government was defeated in China in 1949.  There are also residents who lived in the community under the Japanese era. The community residents had been living on the land for the several decades, paying property tax, commercial tax and also electricity, water and gas bills.

The Huaguang Community is to be razed to make space for a government bid to create a district that resembles the Tokyo Roppongi neighborhood.

How extremely ironic the government decided to name the project “Taipei Roppongi (台北六本木) ”.  What the neighbors and local residents, who came to heckle the young protesters and residents, didn’t realize, is during the Edo period, Tokugawa insisted for the clan leaders of the six daimyo to come live in the area that would later be called Roppongi, to move them away from their home turf and to prevent them from revolting.  As Roppongi prospered, the feudal lords eventually sought expansion of the area and forcibly took land from their neighbors.   As I told a woman in the process of screaming at the young protesters, “You know, ma’am, what they’ll want next after they raised the glitzy buildings on this plot will be the old apartment you’ve been living in for the past forty years.  You’re naïve to believe the developers are going to stop right here”.

Today's Roppongi in Tokyo is a busy place.  The place is filled with night clubs, hostess bars, cabarets strips bars and restaurants.  However, it is also riddle with crime and known for the presence of yakuza members, both as patrons or business conductors.  If the same phenomenon happens in Taiwan, I doubt those from the underworld would be as tolerant to heckling as the Huaguang residents.

Since the residents and young protesters put up a hell of a fight when the last demolition took place, the Daan District Police came to the Community thirteen hours prior to demolition, to put up barricades and wired gates to block off the community from outsiders.  There is an on-going dispute on the legality of the police action.

When I arrived at the community at around 7:30pm, there were police officers everywhere, asking for identification from any one who wanted to enter or approach the community and turning away those who they thought did not belong, including journalists with press passes.  The supporters and the residents were planning a concert with food from restaurants from the community, but the police effectively ruined the “festivity”.  As I walked around the community to survey the houses, I saw an old woman, who I later found out is a resident and worked as a street sweeper until three years ago, stood at the wired gate and told the police officer guarding the gate repeated that “they took NTD$2,000 from me every month, I cry every month”.  She’d repeat that same sentence to the police officers every five minutes. 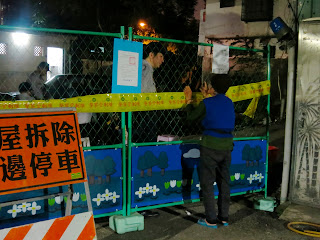 The concert and speeches from residents, human rights activists and academics continued until after 10:30pm, when the police would not allow a resident to take her usual route home as she came from work.  Clash broke out as the protesters attempted and then successfully removed the wired gate, forcing the police to retreat to their second line.

I went home to sleep for a few hours, and then woke up at 4:45am to head back to the community to watch the demolition and protest.  This time, J. Michael Cole, the Deputy News Chief of the Taipei Times accompanied me.   We were met with a much larger police presence at both ends of the barricade.  Mr. Cole was allowed into the restricted area to interview and take photographs of the event, as I stayed outside and chatted with the residents, the protesters, the police and passersby.

Another clash occurred when the police tried to move excavators into the restricted area.  A few students were hurt, as the police was extremely rough with them.  The students then sat on the ground, holding each other’s arms, chanting, “Forced Demolition is Tyranny!  Government fine kills! (強拆暴政, 罰款殺人)”

I then moved to the east barricade.  I stood on the sideline and spoke to a few very tired and tattered looking officers, as the students distributed flowers amongst themselves.  “I’ve been here since 8pm last night, and I am still here…it’s the third hour of my overtime!” an older police complained.  “You must be tired”, I said.  “Yeah well”, he said, “but I’ll tell ya, these are the highest quality protesters I’ve seen, and I’ve been on the force for thirty years”.  He continued, “I can tell these students are so dedicated and good-natured.  They are good kids.  I don’t really have the hearts to be tough on them”.  A CID officer then said, “When I arrived, I took a quick look at the students, because I’m afraid my daughter could be among them”.

Later, as the students clashed with the police at the east barricade, I saw the same senior officer stood around, not really pushing back, as his other colleagues try to prevent the students from approaching the demolition site.  As he saw one young protester grabbing another policeman’s shield, he reached around me and tapped the protester lightly on her shoulder, distracting her and giving his colleague the time to retract his shield.

The protest ended late in the morning, as the protesters threw ghost money in the air to give to the money-hungry businesses and politicians.  The two-day protest was over.

Some onlookers and passersby yelled and heckled the protesters, especially the young ones.  A few even tried to lecture them.  An old mainlander, who claimed to be a retired military officer, carrying a homemade bag with the phrase “Diaoyutai Islands belong to us” taped to the bag, told the students to go home and study and stop wasting their time.  Another woman with bags of grocery screamed at the protesters, “You people stand in the way of Taiwan’s progress and modernity! All you people know is whine!”  The third woman pointed at the students and sneered, “Ignorant young people with too much time on their hands! Go do something else if you are bored!  These people are freeloaders.  They need to be kicked out!”  One angry neighbor, who has been screaming at the protesters since the night before, exclaimed, “If it were up to me, I’d set all of your houses on fire and see if you leave or not!”

To me, the young protesters were nothing but ignorant.  The students are not preventing society from progressing and modernizing.  On contrary, the students are the ones who understand modernity and progress shouldn’t be narrowly defined as erecting expensive high-rises, building posh shopping malls and paving wide roads.  Progress and modernity of a democratic society like Taiwan also means recognizing an individual’s right to preside and live, respect the opinion of the minority, taking care of the weakest and neediest members of the society and lending compassion and humanity while upholding the rule of law.  To many of the elderly mainlanders, Huaguang is the only home they know.  They’ve never been married, have no children and could never return to live in the country across the Strait and with the estranged family members that they had to abandon because of war.  The Huaguang eviction, demolition and protests were especially troubling to me (even when I've personally witnessed a number of different protests) because those who are being driven out of their homes without any assistance are the members of society who sincerely cannot help themselves.  Even though some of the younger members of the community (by younger, I meant those who are in their late 50s and 60s) had jobs as mechanics, food vendors and cab drivers, they are living right on the poverty line that without any assistance, they will not be able to get back on their feet.  The presence of students at the community gave hope to the residents that they were not invisible or forgotten, if only the rest of society and government could just do the same.

(All photos by the author). 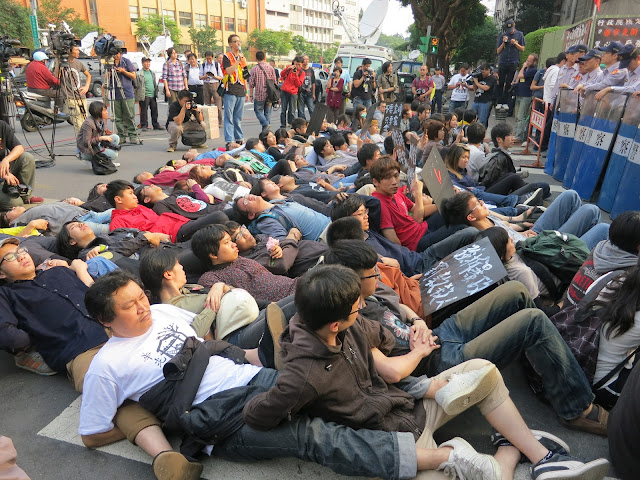 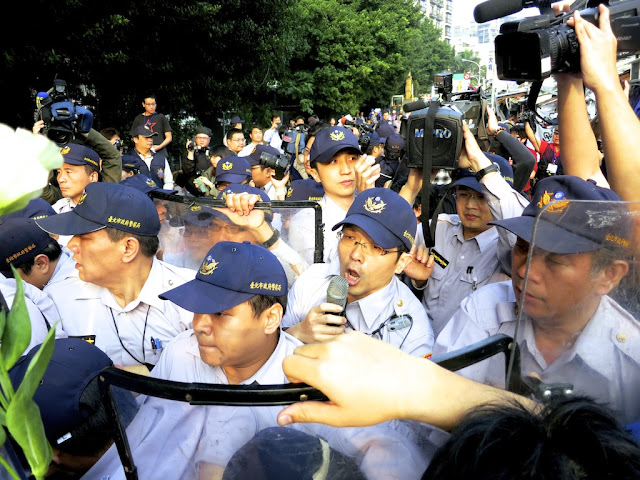 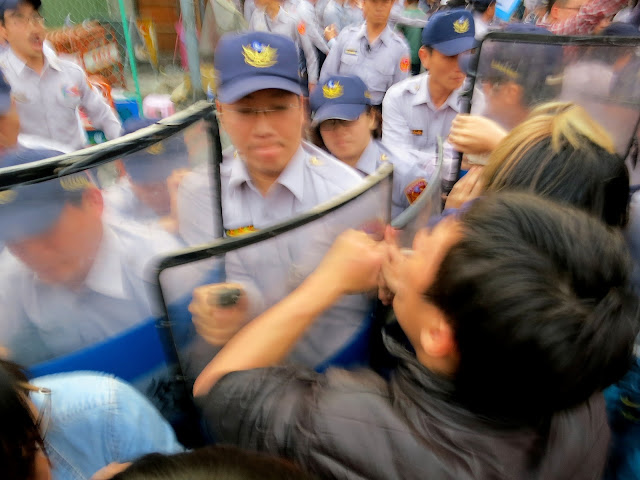 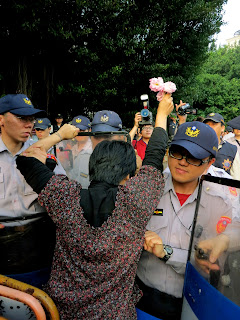 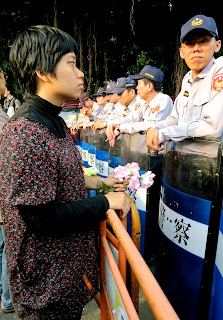 Thanks for the comment. The community is fairly quite for now, as the MOJ has temporary suspended demolition pending the city government's evaluation of the remains of the Taihoku Prison at the site.

Thanks for sharing! I agree with your last paragraph, and have seen over the months the slow transformation of those peaceful inhabitants into potential homeless people, and how angry they gradually became, this is really heart-breaking.

Do you know where to find information on what's going to happen next?