Standing on the Side of the Egg - Forced Demolition of Dapu homes a government sanctioned robbery?

Moments earlier, I saw the same blue shirt sprinted from my left toward the Presidential Office, followed by a blood curdling scream I would never be able to forget for the rest of my life, “My home!  They are tearing my home!  It’s too late now! My home!”

It was Mrs. Chang (Peng Hsui-chun 彭秀春), whose home was being demolished by the Miaoli County Government, as the protest in front of the President’s office was happening.  As Mrs. Chang ran toward the Presidential Office, she was met with several police shields, pushing aggressively and pressing down on her body.  Mrs. Chang's face and hair were completely wet.  It was difficult for me to tell whether the droplets on her face were tears or sweat.  Probably both.

The slim and frail Mrs. Chang was overwhelmed by the force from the police shields.  She stumbled and fell at my feet.  She soon lost consciousness.

There really wasn't any time for me to think, as I observed a group of men, some with shields but mostly with cameras and other media equipment descended on Mrs. Chang, attempting to snap a few shots of her laying on the ground.  Then,  a small, elderly man (later I found out he was from Miaoli) came out of nowhere and grabbed my left hand with such firm grip I thought he would crush my hand bone.  The small man planted his legs firmly into the ground while holding out his arms and yelled, "Back off!  Give her some air!"

I held onto the elderly man’s hand and tried my hardest to not fall on Mrs. Chang, as the weight of reporters and their equipments piling on my back.  I could feel my old left shoulder injury hurting, and my left arm felt like it was being pulled out of socket.

The minutes felt like an eternity, as the elderly man and I held hands until the crowd receded   I’d pay the price of achy back, legs and arms for the next two days, but it’s ok.  I wast about to let anyone inflict more injuries on this poor woman.

Regardless of where one stands on the demolition, the fact is, Mrs. Chang and his husband had been living under tremendous stress for the past three years, afraid something bad would eventually happen to the home and land they've been living in for the past three decades.  Mr. Chang now suffers from severe depression and is now also exhibiting the symptoms of paranoia.  Mr. Chang has been committed to a hospital in Taipei since early July, after his psychological and physical break down after being dragged away from the Executive Yuan the evening of July 3rd.

The Dapu Borough residents received notice from the county government last month, asking them to either evict themselves by the 5th of July or suffer the consequence of forced demolition.  The central government, specifically, Vice President Wu Den-yih’s (吳敦義) denied he has broken any promises, even as the official document from the Executive Yuan stated the residents of Dapu were to keep their land and homes.  In a predictable manner, Miaoli County Commissioner Liu Cheng-hung (劉政鴻), taking Wu's words as permission to destroy, utilized the most despicable strategy and means possible to demolish the residents homes.

As expected, while the Dapu residents and their supporters came to Taipei for a press conference to plead with the central government to stop demolition, Liu sent in hundreds of police officers as enforcement, firefighters and workers with heavy machinery to raze the resident’s homes.  Without even allowing the residents to pack their personal belongings, the demolition crew destroyed the homes in less than two hours.
Taipei Protest 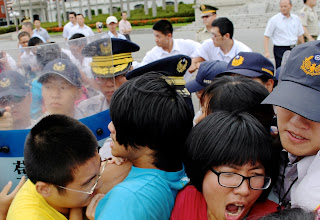 Meanwhile, in Taipei, hundreds of protesters took over Ketagalan Boulevard and moved their way toward the President’s Office.  The police attempted to separate and block the protesters with no avail.

A group of students carrying a giant plastic sheet with slogan and painting of Dapu sat down right in the middle of Ketagalan Boulevard while chanting, “Keep your promise!  Keep the Houses! (信守承諾, 原屋保留!)”

Another group of protesters were able to make their way to the Presidential Office, also chanting the same slogan.

The protesters clashed with the police several times before Mrs. Chang showed up and was knocked unconscious.  After the ambulance took her to the hospital, the police called in two police trucks to remove the other protesters from the premise.

We learned later on the police buses dropped the protesters off at Sun Yat-sen Memorial.

There were lots of tears at the Presidential Office protest.  It was difficult not to be moved by some of the scenes, even as an observer.

Toward the end of the protest, Professor Frida Tsai(蔡培慧) of the Taiwan Rural Front (台灣農村陣線) was beside herself.  With tears streaming down her face, she called for Taiwanese to come forward to protest the cruel, inhumane and illegal way Commissoner Liu has destroyed the Dapu residents’ homes.  She also called for  guerrilla-style protests from then on.  She said, what was being torn down was not only the Dapu residents’ homes but Taiwan’s democracy as well.  Professor Tsai also said academics, lawyers, students and the Dapu residents have always honored Taiwan’s democratic procedures.  They went through negotiations, filed lawsuits, protested peacefully and received official documents from the Executive Yuan promising the residents their homes, however, the government and officials kept none of its promises.  Therefore, it is now time for the protesters to adopt more drastic strategies and impose their own rules to let the government know such behavior is intolerable.

[Update] - Students and other Dapu supporters followed the President, Vice President, the Premier and the County Commissioner everywhere they go all weekend.  They held placards, shouted and threw hog feces and eggs at the officials. Four students went to Commissioner Liu's home at 6am and threw paint at his home.  Liu was said to come out of the balcony in a fury, calling the student activists "Shameless (無恥).  Yang Ru-men (楊儒門), the Rice Bomber (白米炸彈客) also threw a paint bomb at the President's Office on Friday night. 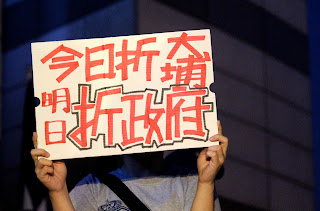 The images of Mrs. Chang and her son going through the rubble to collect their personal belongings were gut-wrenching.  Legally, before any eviction, the enforcer needs to allow the evicted reasonable time to pack their belongings before eviction, and in this case, demolition.  County Commissioner Liu did none of that.  Mrs. Chang and the other Dapu residents didn’t even have time to pack a change of clothes or even their underwear, as they said.

In what’s left of the Chang’s home, one could see blankets, quilts (Mrs. Chang’s hobby), teddy bear, children’s books, blouses and Mr. Chang’s suits, all soaked in mud.  On Friday afternoon, as Mrs. Chang, her son and their supporters were trying to recover what they could from the rubble, Commissioner Liu again sent in police officers to surround the pile of rubber to prevent the Changs from obtaining their property and documenting their loss.

The protesters went in front of the Kuomintang Headquarters on Friday night for another protest, where they threw eggs at the KMT headquarters building.  Ma’s campaign office for his chairmanship, where he is running unopposed, was also egged.

A student representative from Tainan spoke at the evening press conference in front of the KMT headquarters and quoted world renowned Japanese novelist, Haruki Murakami (村上春樹), to explain her participation in the protest.  She said, "在高大堅硬的墻和雞蛋之間, 我永遠站在雞蛋那一方 (Between a high, solid wall and an egg that breaks against it, I will always stand on the side of the egg)".  As soon as she said the word "egg", eggs started flying before the police officers were able to put up the egg-net.  Most of us ended up in the line of fire.  I am very glad; however, those weren't stinky eggs like the ones the Miaoli Yuanli resident threw at the Ministry of Economic Affairs a few weeks prior.  That kind of stench can stick with one for days.

Mrs. Chang and her supporters continued their sit-in at the leftover 0.3 ping of her property, as the students trailed the four major government officials responsible for the Dapu demolition.  The last I heard, event schedules of the four were being posted on social media to encourage citizens to join the protest.

What I find the most hopeful and comforting, in the midst of such tragedy, is the exhibit of compassion and humanity from other citizens.  Many people went to Dapu on their own to help the Changs and others salvage their property.  Many donated money, and many also showed up to volunteer to stay with the families, as their recover from the shock and trauma.  Many also joined the protest. 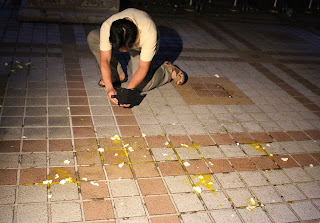 A young mother of three decided to let the President know what she though to him, as he visited a paper factory near her home in Taichung.  This woman had no protest experiences and being a mother of three prevented her from participating in any of the protests.  However, when she learned President Ma was going to attend an event at a venue approximately ten minutes from her house, she decided to speak her mind.  As she and her young son saw the President coming toward them, the young mother screamed, “Mr. President!  Hi Mr. President!”  As President Ma approached her, she shouted to him in her trembling voice, “Today you torn down Dapu, Tomorrow we tear down the government!”  President Ma was quickly whisked by security while looking stunned.  The young mother later posted an entry on social media saying she sincerely hopes others can join her.  A few celebrities and film directors did.

There has been a dozen protests throughout Taiwan, targeting the President, Vice President, the Premier and the County Commissioner.  The Taiwan Rural Front and supporters of Dapu vowed the protest will keep happening until the issue is resolved.

The case of Dapu has proven to be one of the most difficult cases I’ve monitored since 2010.  Imagines of excavators bulldozing and destroying the Dapu farmers’ crop two weeks before harvest still play vividly in my head.  Words of Mrs. Chu, who committed suicide by drinking herbicide, still resonant.  Now, Mrs. Chang’s brown sugar green bean soup, her humble demeanor and soft voice will also forever be with me, along with her heartbreaking scream, pleading for the powers that be to spare the home she worked so hard for and raised her family in.

Dapu constitutes government-sanctioned robbery.  The residents whose homes were being demolished were not appropriately compensated.  NT$900,000 will not allow the Chang family to start a new life with a new house and store.  The central government tolerated and endorsed the Miaoli County Commissioner’s vendetta against hard-working citizens who refused to participate in the commissioner and his cohorts’ endeavor in their distorted interpretation of democracy, modernity and progress.  The case of Dapu, like many other on-going cases, is an embarrassment to Taiwan’s democracy and to Taiwan.

(All photos by author) 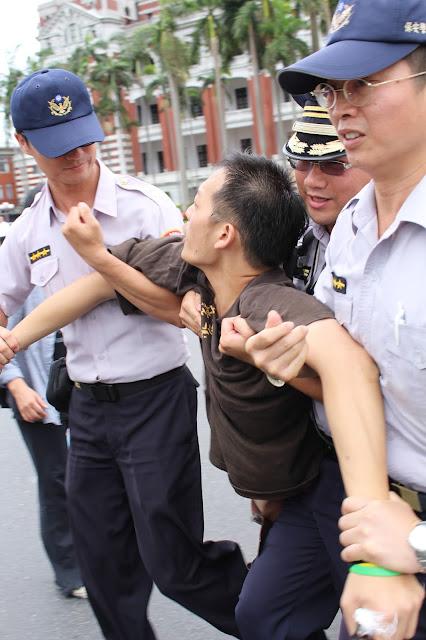 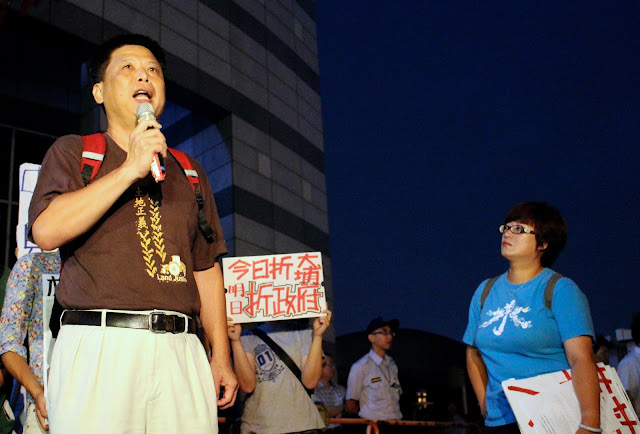 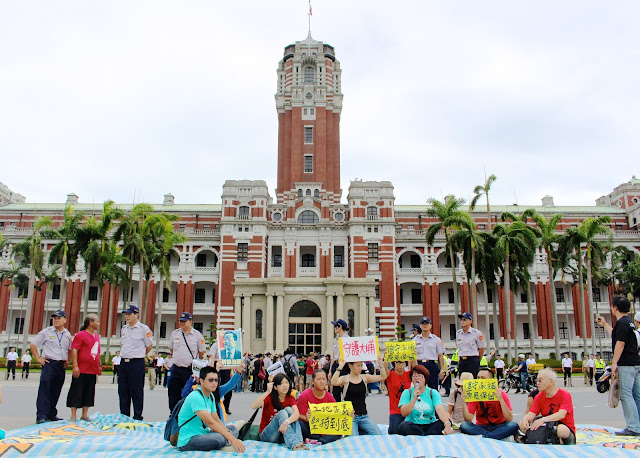 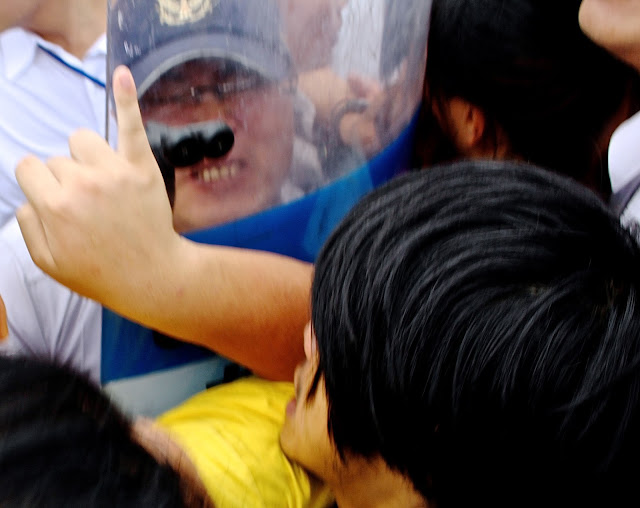