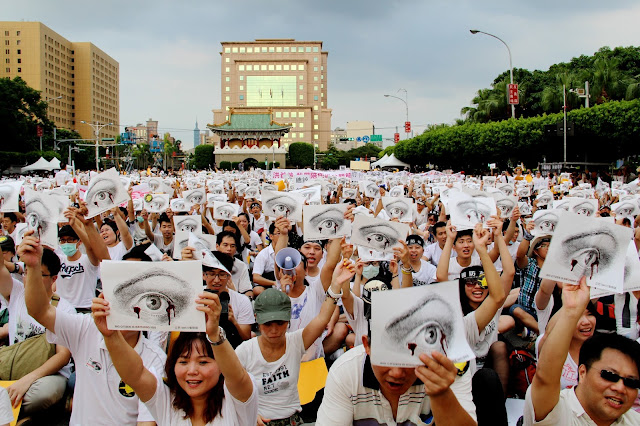 Knowing there would be a big turnout but not exactly the extent, we arrived at Ketagalan Boulevard an hour before the start of the event on Saturday. As we got out of the taxi, we discovered Ketagalan Boulevard was already filled with people in white.  Waves of white shirts continued to move into the area, and soon, vicinity in front of Jing-Fu Gate(景福門), Liberty Square, Chiang Kai-shek Memorial Hall were filled with rally attendees, and late arrivers took up spaces on Renai Road, Xinyi Road and Zhongshan S. Road.

This is the second protest for the death of Army Corporal Hung-Chung-chiu.  The first one, held on July 20th in front of the Ministry of National Defense, was attended by approximately 30,000 people.  Unsatisfied with speed of investigation and the lack of clarification on the extent to which Corporal Hung was sent to confinement three days before discharge and forced to perform exercise while being denied water, which eventually led to his death, Citizen 1985 organized the second protest and called for a hundred thousand people to join.  A quarter of a million turned up.

The organizer distributed signs with a bleeding eye on them, accompanied by the slogan "Big Citizen is watching You" and asked participants to hold up their signs to demonstrate their discontent and frustration.  There were many there with their own home made signs and placards.  It was an incredible sight when everyone held up his sign and tens and thousands of eyes were "staring" at the President's Office behind the stage.

Politicians from two parties, the Chinese Nationalist Party and the Democratic Progressive Party, went on stage to address the crowd, all promised to support reform of the military, especially the military's court system.  The crowd answered back with repeated chants of "Keep-Your-Promise (說到做到)!!"

The most moving and heartbreaking moment came when Corporal Hung's family members went on stage to thank the participants for their continuous support and encouragement.  Corporal Hung's mother spoke for a few minutes and again called for answers to her son's death and punishment for those responsible.


Another emotional moment came when the organizer asked family members of other soldiers who died of mysterious death while in service to come on stage to stand together in solidarity.  Parents of a few soldiers spoke, including the parents of Chen Jun-ming(陳俊銘), whose body was discovered under his blanket with thirteen stab wounds, and his death was ruled a suicide by the military.

The protest ended with the participants singing the Taiwanese version of "Do you hear the people sing?" while turing on the flashlight on their cell phone to symbolize stars in the sky and providing light for Corporal Hung's spirit to travel to the other world.  Again, another incredible sight to see.

The majority of the participants were young, and for many of them, it was their first time taking to the streets.  The composition of the crowd is quite different from the university student protests I have been observing in the past few months.  It is more similar to the crowd of the Anti-Nuclear Power rally.

President Ma Ying-jeou, Minister of National Defense Andrew Yang and former Minister of National Defense Kao Hua-chu all attended Corporal Hung's funeral on the following day (August 4th).  After paying his respect at the alter, Ma visited the parents of Hung, who, by tradition, couldn't be at the funeral or bury their son.  In the Hungs living room, Ma rambled on for more than twenty minutes while the parents barely made eye contact with him.  The Uncle, who has been the family's spokesperson and has been on television for the past month, wanted to express his frustration and demand for further investigation and clarification.  As he began to speak, Ma cut himself and asked, "And who are you?" 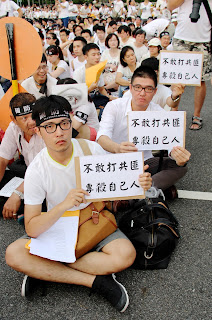 Ma promised the possibility of reopening investigation to Hung's death, but the family members said they don't expect much from the government.  The family also rejected having a military funeral for Hung.

Ma was heckled everywhere he went, including on the day of the rally, as he retreated to Alishan with Premier Jiang Yi-huah.  Citizen 1985 encouraged rally participant to follow President Ma with the big citizen eye to remind him of his responsibility to the citizens and the people are indeed watching him.  Citizen 1985 also encouraged everyone to express his opinion when passing through the building of the Ministry of National Defense.  This is the second civil movement to ask citizens to remind government officials of their obligations.  The first was the supporters of Dapu Borough.

Song: "Do you hear the People Sing?" 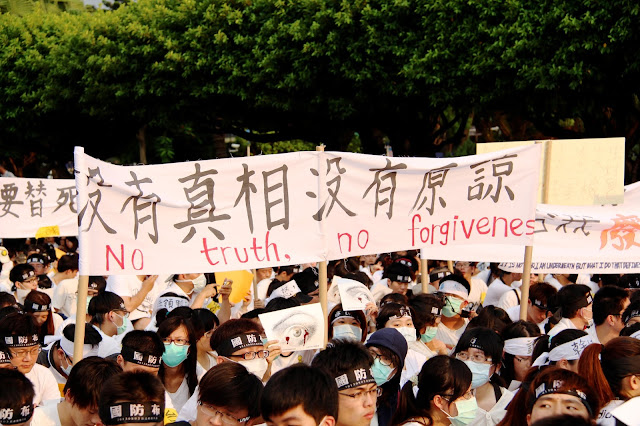 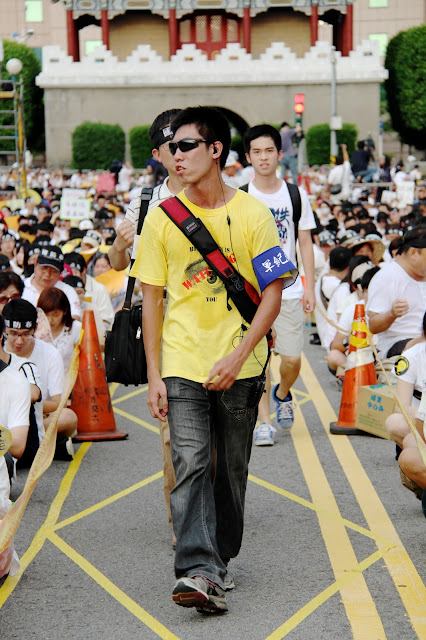 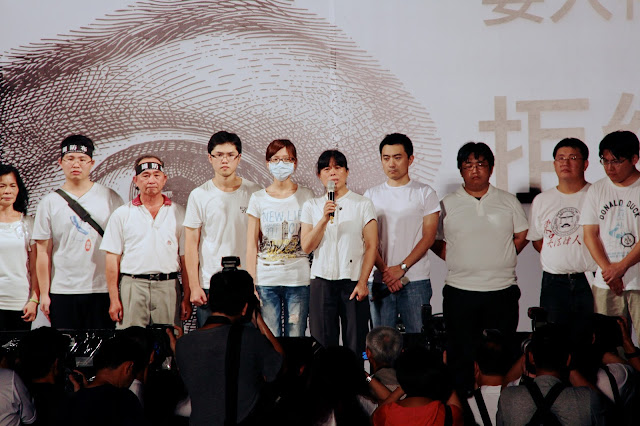 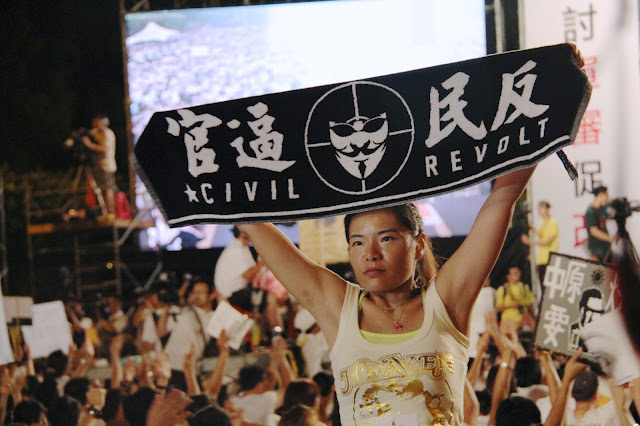 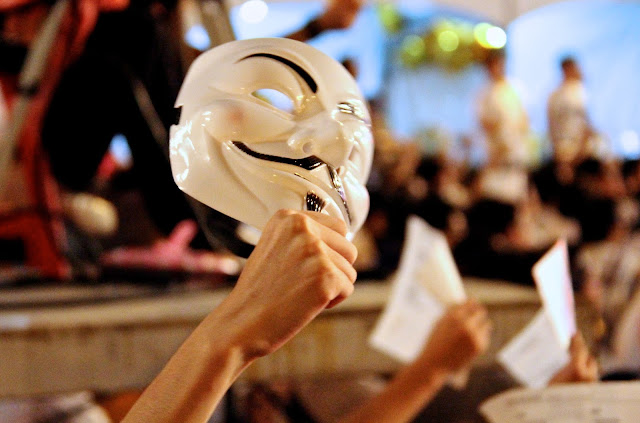 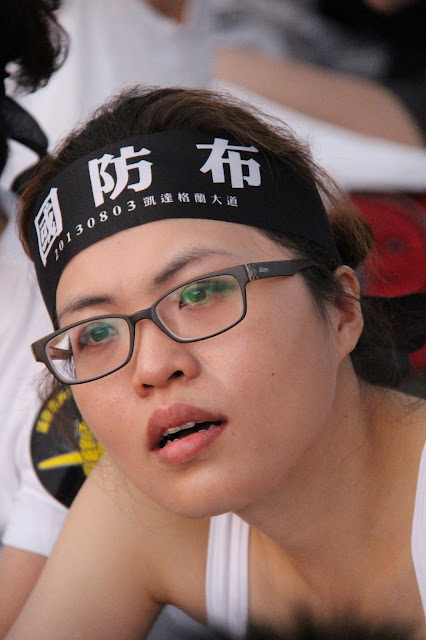 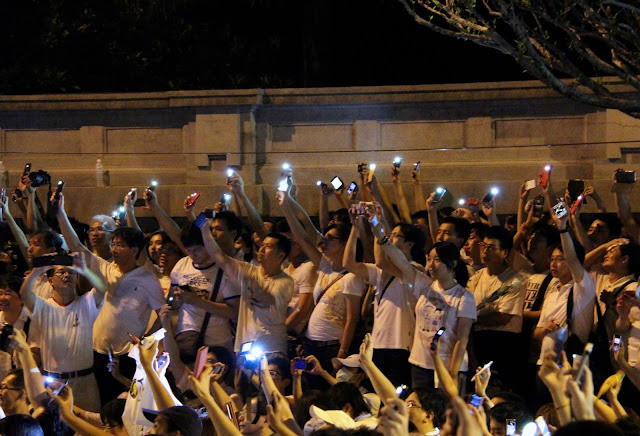 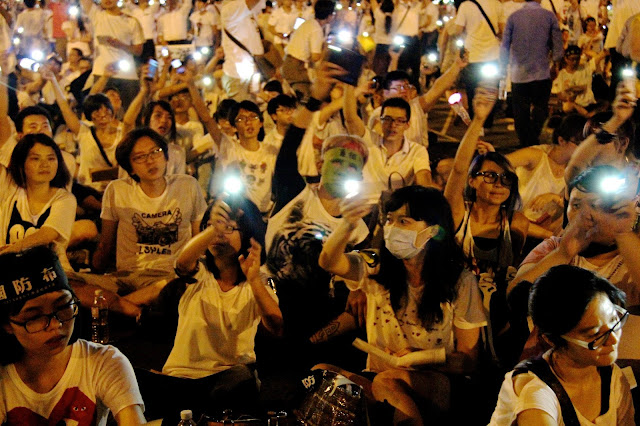 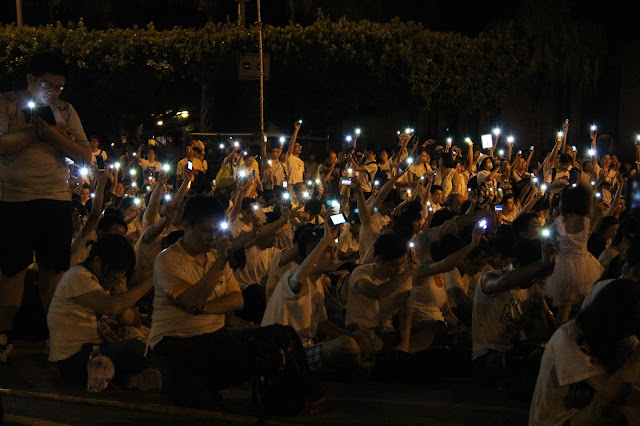