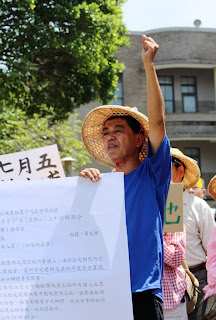 I received words that Mr. Chang of the Chang Pharmacy was missing yesterday morning.  I had a very bad feeling upon learning the news, but I was thinking, maybe Mr. Chang just went for a walk, as he usually does or maybe he was just confused for a bit, as he has been suffering from a few psychological ailments. The others would probably find him quickly and bring him home.

I learned what I fear the most after lunch yesterday.  Mr. Chang's body was found face-down in a drainage ditch near him home.  Even then, I thought to myself, maybe they made a mistake. We'll soon receive a correction message on the matter.  What came next was the opposite. It was confirmed.  Mr. Chang was indeed gone. Cause of death: drowning.  The police are still investigating how.

When I arrived Taiwan three years ago for research and data collection, I was shocked by a Youtube video showing excavators being driven into acres of rice paddies, flipping and digging up crops that were almost ready to be harvested and police officers holding back elderly crying farmers and preventing them from going after the excavators to stop them.  I later discovered the incident happened in Dapu Borough of Jhunan Township of Miaoli County.  The county government sought to acquire those land to make space for an expansion project for the Jhunan Technology Park.

What was even more shocking was the brutality being inflicted on the farmers, most of them seniors and the unapologetic, pompous, tyrannical attitude of the small statured county commissioner, Liu Cheng-hung, who was elected into office in 2005.

The residents of Miaoli County, including those from Dapu Borough embarked on a series of protest, some of which were in Taipei.  I met Mr. Chang at one of those protests.

When I saw Mr. Chang again was on June 26th, three years later. I have since obtained my Ph.D. and is now a visiting scholar at the NTU researching the Kuomintang's cross-strait police and voting pattern and also the quality of Taiwan's democracy.  Social movements and protests are naturally part of my subject of focus.

When I heard the residents of Dapu were coming to the Executive Yuan to protest the forced eviction and demolition of their homes in the subsequent month, I was surprised, as I thought then-Premier Wu Den-yih had promised the residents could keep their homes and land.  Commissioner Liu even apologized for his brutal acts. Well, all the government officials involved reneged on their promises. Wu, now Vice President, even said he has never promised anything, but the official document issued by the EY demonstrated otherwise.

When I saw Mr. Chang during the first day of protest, he looked worrisome but was in good spirit.  He didn't remember me at all, so we reintroduced ourselves. He was his usual caring  and kind self, constantly asking other protesters, who were mainly students, if they had enough food or water.  He even shoved a few plastic cups of water in my hand. 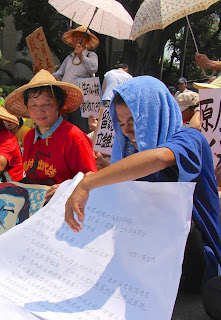 As the government refused to retract the demolition notice, Mr. Chang's smile disappeared.  He became silent, often sitting India-style under the tent but didn't speak to anyone.  His eyes constantly in a daze, usually looking downward.  In the three days in front of the Executive Yuan, I observed the disintegration and destruction of a man, psychologically, physically and emotionally. Mr. Chang collapsed and lost consciousness when police expelled him from the Executive Yuan.  He collapsed again the following week and was rushed to the psychiatric ward of a hospital in Taipei.  There he would say for weeks, before he was released to go back to Dapu.  Mr. Chang was diagnosed with severe depression, paranoia and said he had thoughts of suicide.

So, a day before Mid-Autumn Festival and two months to the date of his home being demolished, Mr. Chang left this world.  He left no note and took nothing with him.

County Commissioner Liu tried to go to the Chang household to light an license last night and was driven away by the students and supporters.  Someone threw a shoe at him and hit him in the head.  Everything was a bit too little, too late.  Commissioner Liu could have preventing all this, yet he chose self-interest and greed over humanity and compassion.  He and his minions bullied the Changs until Mr. Chang was completely broken and no longer the man Mrs. Chang could recognize. Some are those within the central government.  They all have a role to play in Mr. Chang's end.

I don't want to go into the discussion of land grabbing and government responsibility now. At the moment, I want to bring attention to Mr. Chang, as a great and loving father, a family man, a man who was hardworking and with ethics, who was always there to lend a helping hand to his neighbors and others who were experience hard times and always greeted people and his pharmacy patrons with a pristine, white smile.  His sudden departure remains unacceptable to many still and he will be greatly missed.  Many have already vowed to carry on the fight, and I have no doubt they would do so, and I sincerely hope those who are responsible for Mr. Chang's demise get what they deserve, in this life or the next.

(All photo by author, except the first one below from Mrs. Chang)